According to Google, Flash Fiction is characterized as a genre “of extreme brevity”. Most pieces are usually only a couple hundred words long, so when it comes to Flash Fiction, the shorter the better. The challenging thing about the genre is cramming a meaningful plot or character development in such a small space.

But sometimes, adding a restriction to your creative process can help you get going, which is one reason that many writers find the limitations of flash fiction fun and entertaining.

Why do we care about Flash Fiction? Well, for starters, if you’re an RPG player or GM, chances are you’ve already got some experience with building stories. Some players get heavily involved in their character backstories, working a lot of detail into it. Gamemasters who homebrew their own settings build histories of entire towns and cities. Even if you’ve only run pre-made adventures, you could argue that every encounter you run is a sort of story within itself (but that’s a topic for another time).

As a creator of the setting, I like to think of cool scenarios or historical events that we’ve planned previously, then sort of zoom in and write about it. Working off of something that’s already been established helps give me a clear picture of what I’m working towards (see our article on The Starting Line for more). Here are three tips that have helped guide my creative works.

Now, most people can’t really just sit down and decide to be inspired. If that were the case, then writers wouldn’t be able to complain about writer’s block and stuff like that. But we often get awesome ideas when we watch awesome movies, read awesome books, or hear awesome songs. (I know that when Garrett and I got to the end of Hoard of the Dragon Queen for 5th Edition, we were inspired by the ending of Quentin Tarantino’s Inglorious Basterds. We realized that, if needed, it would be totally possible to kill our whole party and still make it awesome)

Find an inspirational story. TV, movies, books, testimonials- all of these have outstanding lessons that can be translated into a fantasy setting. So before you write something, read a book or watch a story movie. The creative juices get flowing from being cultured, so go talk to someone and get inspired!

Stephen King put it simply – “Kill your darlings.” While morbid and a little severe (no surprise from King), he offers some solid advice to all content creators. This doesn’t mean throw out your work, it means to distance yourself enough to allow criticism to enter your work. Sometimes, you spend all this time in-universe, massaging and working your ideas that you fall in love with one. And much like a whirlwind romance, you sometimes need outside criticism to realize that it’s a bad idea.

Show an honest friend your work, ask them what they think of it, then actually listen to what they say. Re-evaluate whether or not you need to include that a town merchant is actually a werewolf in disguise with a weird Oedipus complex. If it doesn’t work, then cut it. Don’t get crushed by self-doubt, but allow the criticism to make your work better.

Side note: when you cut something from a story or character or location, don’t delete it forever. Save it in a different spot, and come back later. Just because something’s not useful right now doesn’t mean that it’ll never be useful.

An epic monologue might be cinematic, but it can easily become yawn-inducing if it’s full of clichés and meaningless chatter that isn’t meaningful to the readers. Try to visualize yourself physically in your scenario; the feelings, the emotions, the logic, keep it all in mind. Does the scenario feel plausible? If not, then see Tip 2.

Having characters make plausible decisions helps justify their actions, maintains a level of sincerity to the readers, which pulls people into the work. Readers are fickle creatures. The faintest scent of B.S. is enough for them to frown, put down your work, and move on to something different. Keep in mind that it’s difficult enough to convince your readers to care about your work, but if you don’t even believe what’s happening on the page, then you’ve already lost.

It’s difficult enough to convince your readers to care about your work, but if you don’t even believe what’s happening on the page, then you’ve already lost.

These lessons have guided a lot of our campaign and story-building efforts, and I hope that they help you as well.

If, for some reason, any of you readers have an itch for writing some fiction, and something you see in the Codex or elsewhere inspires you, then let us know! We’re planning on releasing short fiction pieces every Tuesday to help flesh out the setting. Whether it’s a firsthand account of the Fall of Hammerhold, or a religious text belonging to the Church of Anim, we’d love to have a look at any submissions from our talented readers out there.

You may submit your entry to the Contact section of our site, or on the discussion page of Facebook. We’d like works that are under 1000 words and generally contain a completed story arc. Who knows, your article might inspire future writers! 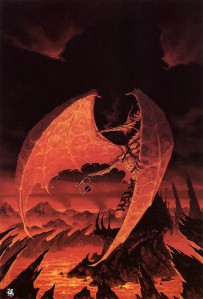